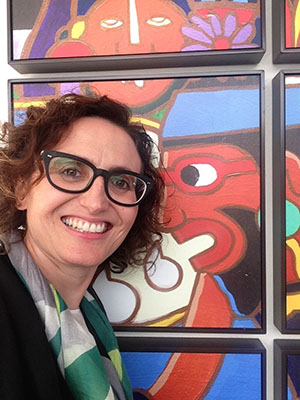 Salve! I joined the Department of European Studies at SDSU in 2005 and am the current chair of the Department of European Studies. I teach primarily upper-division courses in Italian literature, cinema, and cultural studies and direct the Italian language program. I regularly work with LARC (Language Acquisition Research Center) to incorporate state of the art media technology in the Italian classroom. We have recently created an Italian Intermediate and Advanced CAST (Computer Assisted Screening Tool) to assess the oral proficiency of our students based on the ACTFL Rating Scale.

I also collaborate with several other academic programs on campus, including the University Honors Program, the Florence Summer Program, and the LGBTQ Research Consortium, as well as in the region, including UCSD Italian Studies, USD Italian and the Center for Comparative Immigration Studies at UCSD.  I was recently featured in article on Teaching in Quarantine.

Several of my essays have appeared in books such as Postcolonial Italy: Challenging National Homogeneity, Teaching Italian American Literature, Film, and Popular Culture, The Cultures of Italian Migration: Diverse Trajectories and Discrete Perspectives.

I have edited two special journal double issues: one for the Italian journal Il Lettore di Provincia on regional cultural studies in Emilia-Romagna, and one, with Anita Angelone, for the journal Studies in Documentary Film on contemporary Italian documentaries.

In addition to my academic work at SDSU, I collaborate with several Italian American organizations in the community and I am on the Board of Directors of the San Diego Italian Film Festival and of the Italian American Academy of San Diego.

Prior to coming to San Diego I spent two years as Lecturer in Italian in the Department of Romance Languages and Literatures at the University of North Carolina at Chapel Hill (2003-2005). At UNC-CH I was also affiliated with the Center for European Studies and co-organized the annual American Association for Italian Studies (AAIS) conference in 2005 with my colleagues in Italian.

I received my Ph.D. in Literature from the University of California San Diego in 2003 with a dissertation entitled “Italy in the World and the World in Italy: Tracing Alternative Cultural Trajectories” which explored the regional and transnational dimensions of Italian culture in Italy and abroad throughout the 20th century. Some of the cultural productions I analyzed included novels and oral narratives such as Sibilla Aleramo’s Una donna and Marie Hall Ets’s Rosa: The Life of an Immigrant Woman, theatrical representations by the Federal Theatre Project and the Italian anarchist and immigrant theatre, films by Gillo Pontecorvo, Giuliano Montaldo, Davide Ferrario, and Guido Chiesa, and music by alternative bands like CCCP/CSI, and Modena City Ramblers.

I also hold an MA in Women’s Studies from the University of Cincinnati, where I studied feminist theory and criticism and wrote my final paper on the experience of immigrant women in Emilia-Romagna, Italy.

At SDSU, I am particularly involved in student life. I am the Faculty Adviser of the Circolo Italiano and of the local chapter of GKA, the Italian National Honor Society. I was also a Faculty-in-Residence in the Olmeca/Maya Residence Halls on campus (2009-2012), where I coordinated education programs for several living and learning communities.

“The Poetics of Reuse: Festivals, Archives, and Cinematic Recycling in Italian Documentary.” By Marco Bertozzi. Co-translated with Anita Angelone. Studies in Documentary Film 5.2 & 5.3 (2011): 91-106.

“Out of the Shadow: Gabriella Ghermandi’s Ethiopian Italian Performances.” Teaching Performance. Spec. issue of Transformations: The Journal of Inclusive Scholarship and Pedagogy 20.1 (2009): 141-154.

Italian Colonialism and the Southern Question: A Conversation with Professor Clarissa Clò. By Issayas Tesfamariam, Lecturer in Amharic, Stanford University, for his Blog. Part I, 26 May 2013; Part II, 31 May 2013.