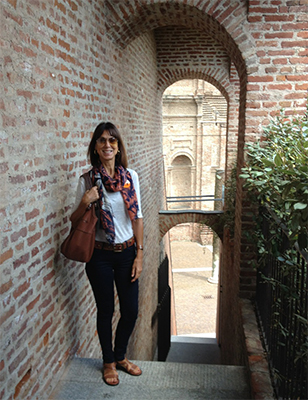 My name is Rosamaria Carrara Ruggeri, I am a native of Italy, I was born in Bergamo, a beautiful town 30 miles north of Milan. I started my professional teaching career, after I received the Laurea in Foreign Languages and Literatures at the Università Cattolica del Sacro Cuore in Milan.

My major was German Language and Literature and my thesis was on Georg Büchner’s theater. I taught German for many years in different High Schools in Bergamo. At the same time I participated in many courses and seminars at various Universities and Cultural Institutions in Germany to improve Foreign Language Instruction. I was also selected after special training by the Department of Education in Italy to assume the role of Leader and Coordinator of teachers of foreign languages.

In 1982 I moved to San Diego, and in 1986 I started a Ph.D. in Comparative Literature in the Department of Literature at the University of California San Diego. My focus was now on Italian and German Literatures with an interdisciplinary approach within the field of Cultural Studies. During my studies at UCSD I was the recipient of an Undergraduate Instructional Improvement Grant, funded by the Regent’s Instructional Improvement Program. I prepared a new and improved set of instructional materials for Beginning Italian at UCSD, which resulted in a LAB MANUAL in two volumes with TAPES.

In 1991 I received my Master Degree in Comparative Literature and I passed the PhD Qualifying Examinations at UCSD. My dissertation, which I didn’t complete, is entitled “ A train to the South, the shortest way home: The representation of Italy in Contemporary German Literature” and deals with the issue of Politics of Representation.

My scholarly interests resulted in two papers: one was on the topic of post-modern narrative and post-structuralist theory in Italo Calvino’s If On A Winter’s Night A Traveler (1979) and Tahara Ben-Jelloun’s The Sand Child (1985); the other was on subaltern culture (the relationship between the languages of minorities and the official language in Italy) and was entitled “The search for One’s Voice: The Discovery of Languages in Paolo and VittorioTaviani’s Film Padre Padrone (1977).” This latter was published in Selecta: Journal of the Northwest Pacific Council on Foreign Languages, Vol.13, 1992.

From 1986 I have taught Italian Language, Literature, Cinema, Cultural Studies at UCSD, Mesa College, Stella Maris Academy and since Fall 2004 at SDSU.

My methodological approach is a communicative in scope. It aims at having students enjoy the language acquisition process, getting them acquainted with the culture of the country where the language is spoken, and motivating them to continue their study of the foreign language. This process can set an excellent basis for the progression to the study of literature. I believe I have been quite successful with this approach. Both my students and my colleagues praise my energy and ability to communicate my own enthusiasm in the classroom. I like to create a challenging and yet relaxed atmosphere, and engage my students in a process of participation and effective learning.