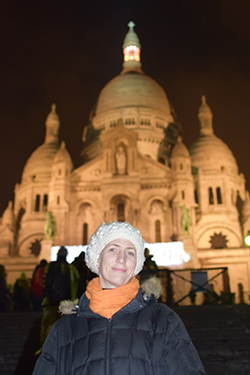 Professor Schuckman Matthews joined the European Studies Program in 2011. She regularly teaches EUROP 101, 301, 424, 435 and 440. Her primary research focus is examining the representation of prostitution in Russian literature and film. Other areas of interest include human trafficking, late/post-Soviet Russian literature and culture, cinema and gender and feminist cultural studies in Russia.

Emily Schuckman Matthews, “Reclaiming "the Spot": The Prostitute as Entrepreneur in Tochka." Studies in Russian and Soviet Cinema 5:2 (2011): 205-225.

Melissa Farley, Emily Schuckman, et al., "Comparing Sex Buyers with Men Who Don't Buy Sex: 'You can have a good time with the servitude’ vs. 'You're supporting a system of degradation,'" Research Paper published by Prostitution Research and Education, July 2011.

“The Prostitute as Everywoman: Examining the role and evolution of the sex worker in Russian cinema.” (Ecole nationale supérieure Louis Lumière, Saint-Denis, Russian Cinema since 1991, disruption and perpetuation of heritage, Dec. 2014).

“Transformation/Reimagination of the Prostitute's Identity in the Late Teens and Early 1920s” (ASEEES, 2013)

“The Writer as Prostitute and the Prostitute as Writer in I. Babel’s ‘My First Fee’ and V. Erofeev’s Russian Beauty” (AATSEEL, 2008)

“The Heroine of the Market:  The Prostitute as Entrepreneur” (AAASS, 2008)

“The Prostitutka Abroad: Foreign Representations of the Russian Prostitute in Film” (University of London: Russia on Screen (Identity and Appropriation): Inter-disciplinary Perspectives on Russia and Cinema, 2008)

“Representations of Prostitution in Film: The Prostitute as Lesbian” (NYU, Center for European and Mediterranean Studies with Network of East-West Women: Gender in Transition: Women in Europe Workshop, 2007)

“The importance of participation and cooperation between non-governmental organizations in combating human trafficking.” (Asian-Pacific International Forum: Joint Efforts in Combating Trafficking in Persons, 2006)

“Trafficking in Russia and Asia: A Comparative Perspective.” (AWSS and Ralph and Ruth Fisher Forum, 2005)